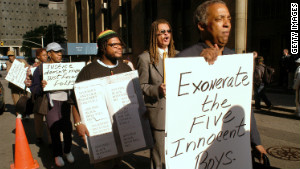 I argue that USA today is one of the least racial supremacist societies in history.

The story of the Central Park Five appears to be evidence against my hypothesis, which I defend in these blog posts and others:

Five black and Latino teenagers were convicted of the rape of a woman jogging in Central Park, New York, in 1989. It took until 2002 for the state to find that they didn’t do it: http://www.cnn.com/2014/06/20/justice/new-york-central-park-five/

Note that these are two separate allegations: “racially motivated” and “coerced by law enforcement”. Obviously, their confessions were coerced – they wouldn’t have confessed to something they didn’t do otherwise. “Racially motivated” is a more difficult charge to prove.

PS. Here’s a good article on the case from Counterpunch: http://www.counterpunch.org/2014/06/20/bill-kuntslers-last-case/

PPS. Police murder of a black teenager in St Louis could also be evidence of racism: http://www.latimes.com/nation/nationnow/la-na-nn-ferguson-curfew-20140816-story.html