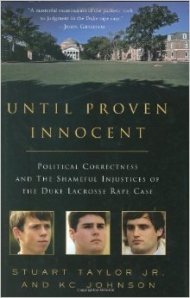 If the Duke University false-allegation-of-rape case of 2006 were nothing more than the persecution of three students by a university, solely because they are white, male, and allegedly wealthy, and that their accuser is black and female, it would show nothing more than the corruption of one university by political correctness – the reverse of discrimination against minorities, women, etc..

But the fact that the district attorney, the local police department, and most of the media, joined eighty-eight academics at the university, in stating or implying their guilt, long after it was clear that no crime had taken place, shows that it’s not just academia. Political correctness is more deeprooted and widespread.

Though they were proven innocent – rather than merely “not guilty”, the DA who prosecuted them was imprisoned for misconduct in the case, and their accuser convicted of murder, much of the mainstream media, for example, the New York Times, Salon, the Wall Street Journal, the Economist, the Daily News, Newsday, the Pittsburgh Post-Gazette, FT Magazine, and the Daily Beast, continues to try to convince the public that they were in fact guilty of something: How the Media Again Failed on the Duke Lacrosse Story.

The continuing saga of the Duke lacrosse three contradicts the hypothesis of professional anti-racists that the USA’s dominant culture is white supremacist, etc..

P.S.  K.C. Johnson’s blog “Durham in Wonderland” about the Duke scandal has shut up shop. Its author now writes for Minding the Campus.

The Southern Poverty Law Center, known to its admirers by the initials $PLC, has exceeded its normal bounds of logic and reason. Reacting to the murder of three attendees at a Jewish Center in Kansas City on April 13th, the $PLC argues

Since September 11th, 2001, more people have been murdered in the USA by white extremists than by Muslims. But if you choose September 10, 2001, as your starting date, the opposite is true.

P.S. Good news – the $PLC and the “Anti” Defamation League have been dropped by the FBI.

Mrs Hampson and one of her accusers

Taking advantage of the fact that, in anti-racism legislation, the burden of proof has shifted toward the defendant, a gang of gypsies falsely accused a British schoolteacher of racial harassment.

Mrs Hampson found herself involved in a clash with a family of travellers who had illegally established themselves on green-belt land and had blocked her way home one day, you might have expected the grandmother to receive a decent hearing from the authorities.

She was eventually acquitted, but not before her life was ruined.